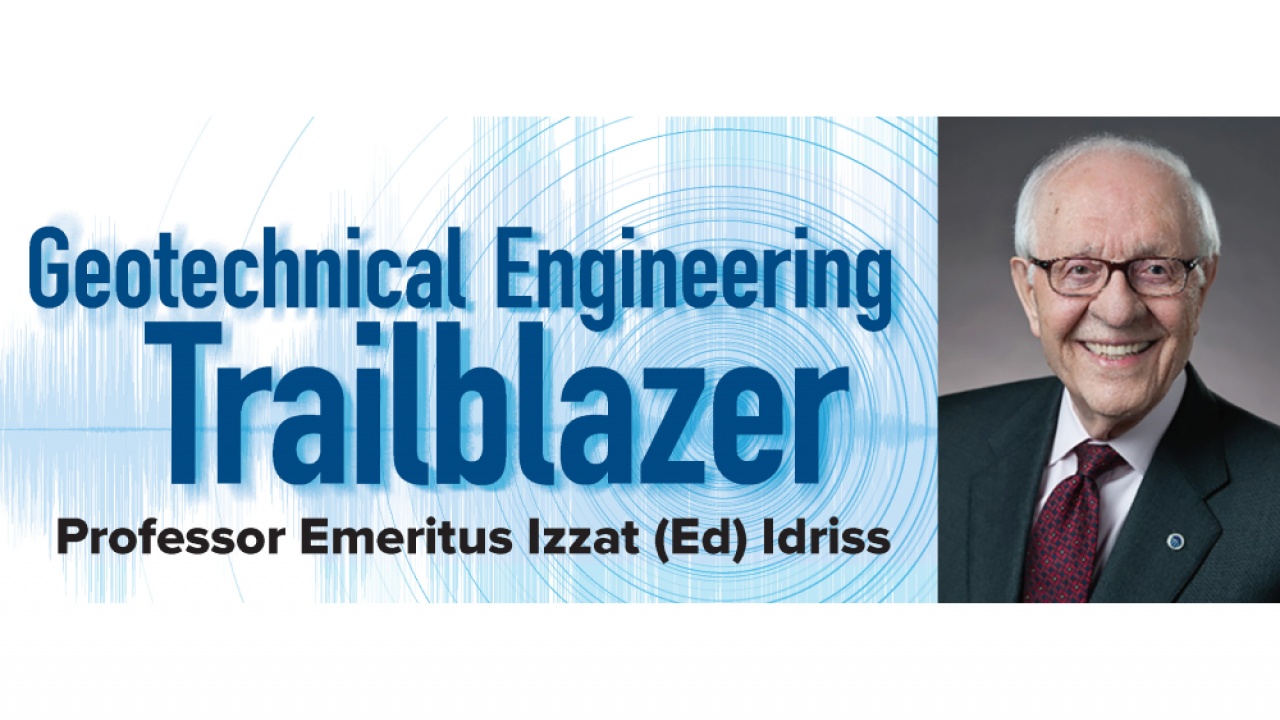 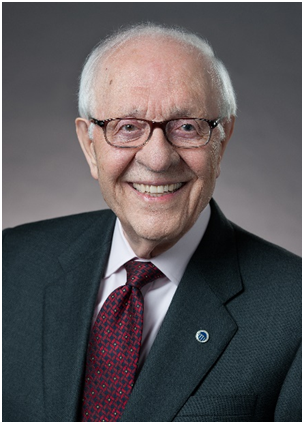 An internationally-recognized leader in the field of soil mechanics and foundation engineering, civil engineer Izzat (Ed) Idriss, professor emeritus of civil and environmental engineering, has influenced the construction of dams, nuclear power plants, office buildings, hospitals, and bridges around the world.

Born in Syria and raised in Damascus (through middle school) and in Beirut, Lebanon, Professor Emeritus Izzat (Ed) Idriss came to the United States in 1954 to complete his bachelor’s degree at Rensselaer Polytechnic Institute. He received a M.S. degree from Caltech in civil engineering in 1959 and a Ph.D. in civil engineering from UC Berkeley in 1966 with a research focus in geotechnical earthquake engineering—a brand new field at the time. For the next  3 or so years  he stayed at UC Berkeley, then for the next 20 years, he worked at the international consulting firm Woodward-Clyde Consultants (now part of AECOM), serving as senior principal and vice-president of a world-renowned geotechnical engineering consulting team.

Upon his arrival at UC Davis in 1989, the same year he was elected to the National Academy of Engineering for “major contributions to the understanding of soil behavior during earthquakes and for the application of these contributions in engineering practice,” Idriss joined the Department of Civil and Environmental Engineering (CEE) as a faculty member and Director of the Center for Geotechnical Modeling (CGM). He says one of his fondest memories at UC Davis was teaching an introduction to civil and environmental engineering class to first-year undergraduates.

“I thought I would show the young students how important engineers are by noting that typically a doctor's or a lawyer work affects directly one person at a time, and indirectly maybe a few tens of others on occasions. But an engineer’s work always affects far greater number of people directly and indirectly. For example, if something happens to a dam, , the effects could involve tens of thousands, or even hundreds of thousands of people. I thought that would be inspiring, but boy, did I scare them!” Idriss said, laughing." This is the time when students are still deciding what they’re going to do and I could encourage them to do things they really love. It was so wonderful to sit down and grade their exams. When somebody does well you say, ‘Oh, my gosh. They got it!’”

As director of the Center for Geotechnical Modeling from 1989-1996, Idriss was instrumental in growing the scope of the center in the early 1990s by securing funding from the National Science Foundation (NSF), Caltrans and Obayashi in Japan for a shaker for the centrifuge to measure the performance of soil and soil-structure systems during earthquakes and other catastrophic events.  The funding from these sources was not very large, but Professor Bruce Kutter and Lead Technician Bill Sluice were able to install a shaker on the largest, at the time, geotechnical centrifuge in the world.

“Despite limited financial resources, Bruce’s ingenuity and Bill’s perseverance made it possible to put together a shaker and make it work that allowed the Center to progress and prosper,” said Idriss. Having fulfilled this objective, Idriss retired as director of the Center and Bruce Kutter took on this responsibility in late 1996.

Professor Kutter and several graduate students proceeded, beginning in 1997, to conduct research using this shaker and, supported by funding from NSF, Caltrans and several grants secured through the Obayashi Corporation in Japan, generated data that were openly distributed for use by other researchers.

From 2000 to 2004, more than $5M in major upgrades to the facility were implemented with NSF funding, under the leadership of Professor Kutter and facility manager Dan Wilson, including a new centrifuge drivetrain, shaking table upgrades, new model containers, advanced data acquisition systems, high-speed cameras and visualization tools. UC Davis supported the project by constructing the Geotechnical Modeling Facility building in 2003.

“It took a lot of effort to secure the early financing for the Center because there was a little bit of skepticism about the usefulness of the centrifuge at that time; for the past twenty or so years, it has grown by leaps and bounds.” Idriss said.

“Professors Kutter, Boulanger and DeJong, Dr. Wilson, and most recently Professors Ziotopoulou and Martinez are continuing the research with very bright students and making significant contributions to the state of knowledge in geotechnical earthquake engineering and other geotechnical issues through very innovative experimental and analytical efforts at the center,” said Idriss. “It is also very exciting that cooperative work with other universities has been going on in the past and is continuing. These universities include UC Berkeley, UCLA, University of Illinois, Virginia Tech, University of Texas at Austin.”

“I have known Ed for 28 years as a mentee, colleague and friend. I hit the jackpot in finding such a mentor when I arrived in Davis in 1992 as an assistant professor. He helped me, through his example and guidance, to be not only a better researcher, teacher and professional, but to be also a better person,” said Ross Boulanger, civil and environmental engineering professor and CGM director. “This commitment to excellence is now embedded in the DNA of our program. It is hard to overstate the impact that Ed has had on the geotechnical engineering profession, our geotechnical engineering group and the lives of the people fortunate enough to have worked with him.”

In 2004, the year he retired, Idriss and his wife established the "Excellence in Geotechnical Engineering Award", which has been awarded to one or two outstanding graduate students every year since. In 2016, Idriss and his wife established the "Mariam and I. M. Idriss Endowed Fund for Geotechnical Engineering Education" to support educational activities that enrich graduate school experiences in geotechnical engineering. These funds help promote the next generation of geotechnical engineers through symposia held at UC Davis by outstanding young professors, government and practicing engineers and to support attendance of our graduate students at technical conferences.

“Ed’s professionalism, thoughtfulness, humor and thirst for learning have been impressed upon me. He has left his fingerprints all over the geotechnical group, and specifically the Geotechnical Graduate Student Society (GGSS) at UC Davis. Ed prioritizes scholarship, leadership and fellowship and these are now the pillars of the GGSS and the base criteria for our annual Excellence in Geotechnical Engineering Award,” said Jason DeJong, professor of civil and environmental engineering. “From simple life mantras, to deep discussions on technical issues in the geotechnical profession, to demonstrating lifelong learning, Ed’s perspective and example has guided me in my professional interactions, development of research ideas and advising of students.”

Today, Idriss and his wife live in Santa Fe, NM. He continues in his research as a UC Davis professor emeritus and in practice as a consultant, while serving on several advisory boards. He returns to campus for the GGSS symposium each year and says he is energized hearing about new research from graduate students. “It’s so satisfying and humbling to help students succeed.”

“From our first interaction in 2009, when I was making my first steps in graduate school at UC Davis, to today, Professor Idriss has not ceased to profoundly impact my way of thinking and my perception of life and geotechnical engineering,” said Katerina Ziotopoulou, assistant professor of civil and environmental engineering. “Every moment spent with him has been full of illuminating technical conversations and exemplary work ethic, professional and personal advice, unbounded passion for learning, always with a generous sprinkle of humor. At UC Davis, and in the geotechnical program specifically, Professor Idriss has embodied scholarship, leadership, and fellowship which through the years became our own principles of community and a guiding light for all of us to work and live by.”

This story was featured in the Fall 2020 issue of Engineering Progress.

In Case You Missed It