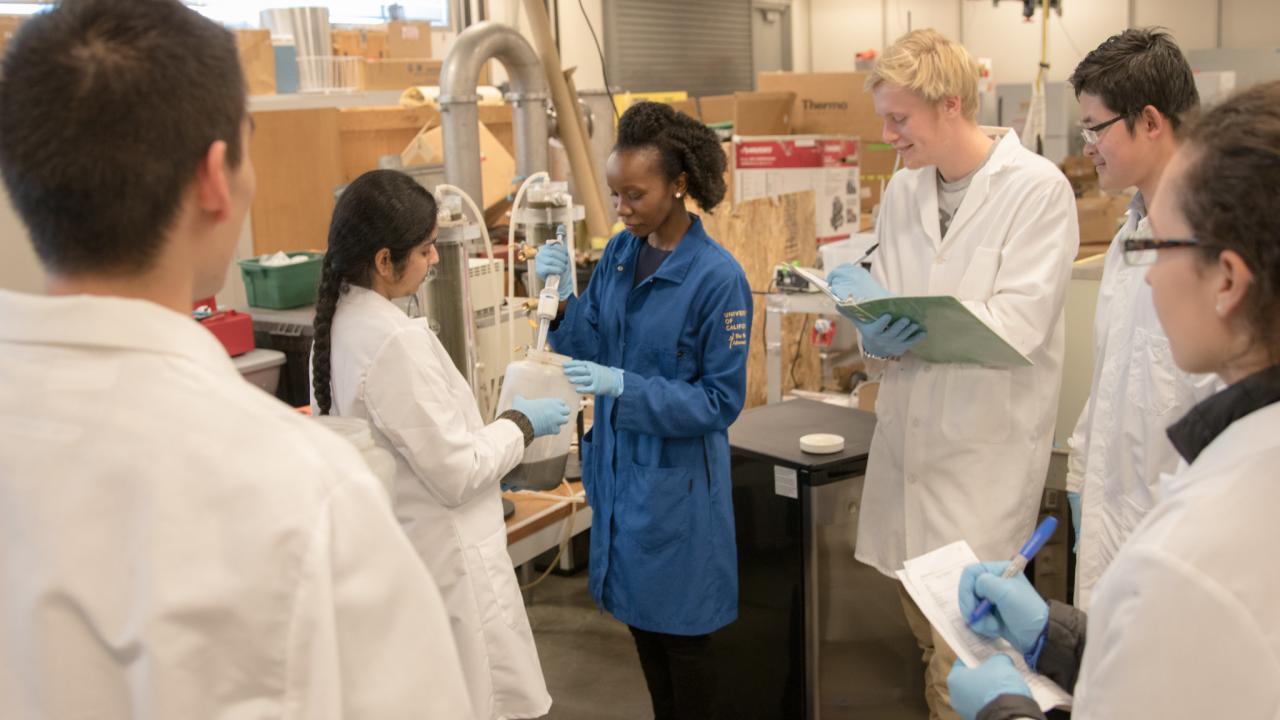 As an undergraduate physics major, Maureen Kinyua discovered her passion for science—combined with a sincere interest in helping others—could lead to a fruitful career in engineering.

“I liked how you could combine physics, chemistry and biology into something more applied,” she said. “Engineering also gave me a way to mix my interest in science while actually doing good for the environment.”

While working toward her Ph.D. in civil and environmental engineering at the University of South Florida, Kinyua says she was inspired by a faculty committee member who told her “waste is not waste, until you waste it.”

Now, as an assistant professor of civil and environmental engineering at UC Davis, Kinyua investigates pathways to repurposing food and livestock waste, as well as developing biological systems to treat wastewater.

Studies show greenhouse gas emissions from livestock such as pigs and cows are a significant contributor to environmental pollution. Innovative development, testing and implementation of various biological wastewater treatment systems will help with reuse of domestic, fecal and livestock waste. These efforts are relevant to farmers, utilities, investors, entrepreneurs and technology providers.

In particular, by understanding how microbes metabolize carbon—a precursor to greenhouse gases such as carbon dioxide—in pig waste, Kinyua and her team can pinpoint a pathway to “pretreating” carbon and reducing its impact on the environment.

The first step, or pretreatment, prepares the carbon from the waste so that it is easier for the bacteria to consume the carbon, akin to cooking the carbon, says Kinyua. “If you think of a carrot, what’s easier to eat, a cooked carrot or a raw one? Cooked is easier to chew.”

After pretreating the carbon in the pig waste, bacteria can more readily metabolize it and turn it into a polymer known as polyhydroxyalkanoate. Downstream, this biologically-produced polymer could be used to make biodegradable plastics, Kinyua says. Although this work is still in an early stage, by understanding the effect of environmental conditions on microbial communities, she hopes to enhance process engineering technologies to recover high-value products from waste.

When she’s not on campus, Kinyua spends her time encouraging young women in developing countries to focus on their education, noting it doesn’t make a difference whether they pursue engineering or an entirely different discipline. “Not everyone is an engineer or scientist. What is more important is to just get an education, to spark an interest in something you like.”

One of the challenges girls in developing countries face is access to menstrual health products such as sanitary pads and tampons. As a result, rather than risk the embarrassment of having their clothes soiled in class, they miss school during their periods and fall behind or drop out entirely.

To address this issue, Kinyua is collaborating with Molly Secor-Turner, a professor at the School of Nursing at North Dakota State University. Turner had previously distributed reusable pads to young women in Kenya and worked with them on menstrual and adolescent health. However, because they didn’t have a place to wash and dry the pads while in school, the girls were wearing the pads for too long, which lead to infections, or just not using them at all.

Today, the girls have separate toilets at the school where they feel comfortable enough to change, wash and dry the pads. Because the school is located in a region with scarce water, Kinyua is working on a menstrual health management system to treat and reuse the water used to clean the pads.

Using pig’s blood mixed with UC Davis wastewater as a model system, Kinyua and her team are exploring how to remove yeast and other gynecologically-relevant bacteria from the pads and get them clean enough to be reused safely. Like many talented engineers, Kinyua is already thinking a few steps ahead.

“We can engineer a greywater treatment system for the school, but even if it works, the next challenge will be socializing the process,” she says. “We’ve provided toilets, we’ve cleaned the water, now will they do it? There is always a human element to every technology.”